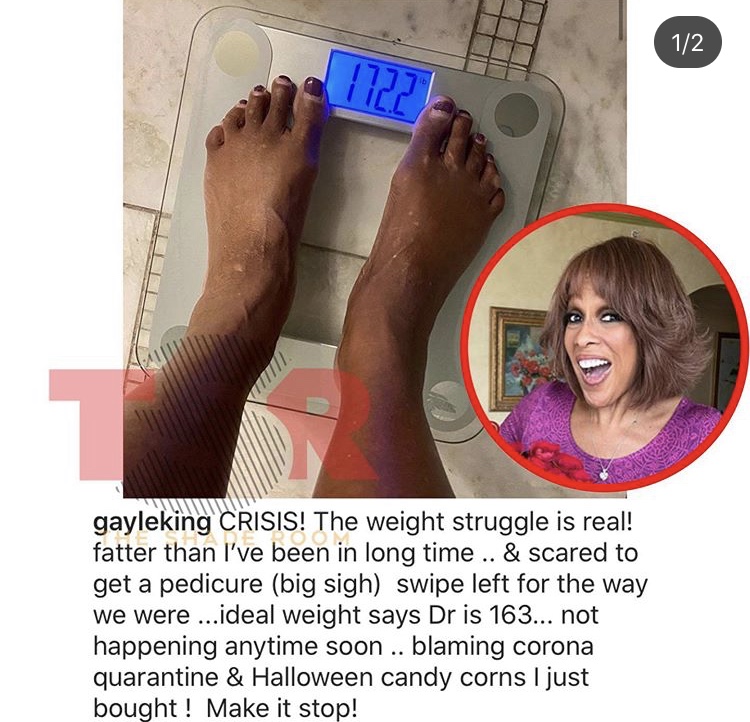 Roommates, since we’ve all been in quarantine for most of the year, many of us have experienced weight gain due to being housebound—and that also includes Gayle King. Gayle recently took to Instagram to come clean about her weight gain courtesy of a photo and a very revealing caption.

If you were feeling guilty for gaining more than a few pounds this year because of quarantine, don’t feel too bad because Gayle King just confirmed that she is right along with you. Posting to her Instagram, she got real with her fans regarding her weight struggles.

Gayle explained why she gained weight this way:

“CRISIS! The weight struggle is real! fatter than I’ve been in long time .. & scared to get a pedicure (big sigh) swipe left for the way we were …ideal weight says Dr is 163… not happening anytime soon .. blaming corona quarantine & Halloween candy corns I just bought ! Make it stop!”

Meanwhile, Gayle and her bestie Oprah Winfrey recently reunited for the very first time in several months after both testing negative for COVID-19. The two had been separated and quarantined in different locations in an effort to stop the spread.

When the two friends reunited, the first thing they did was fiercely hug each other—and admit that it had been the longest they had ever been apart since their friendship began well over thirty years ago.