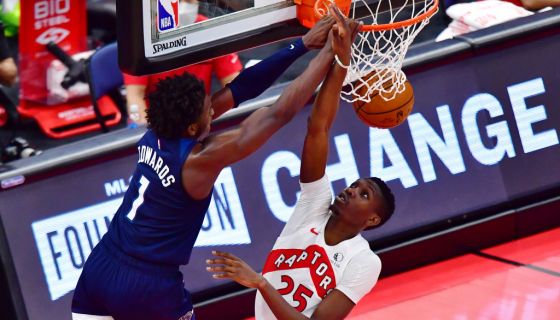 Anthony Edwards may not end up winning the Rookie of The Year when it’s all said and done, but he may have definitely secured the title of dunk of the year. Friday night (Feb.19), Edwards pulled off of one of the most insane posterizing dunks we have seen in a while against the Toronto Raptors and literally broke the internet with it.

Raptors’ Yuta Watanabe is probably wishing he made a business decision last night by letting Edwards get the rim rocker. Instead, he will now forever be known as the victim in the Edwards physics bending dunk. The homicide by dunk took place with just 19 seconds left in the third quarter. Edwards caught the ball on the left baseline and didn’t let DeAndre’ Bembry’s attempt at intercepting the pass stop his momentum as he elevated and subsequently took Watanbe’s soul. Immediately he was given the DUNK OF THE YEAR crown.

DUNK OF THE YEAR.

The still photo of the dunk accurately captures when Watanabe’s soul left his body is even more telling.

There is even a frame-by-frame breakdown of the vicious dunk.

Here is one more breathtaking view of Edwards catching a body.

Edwards’s dunk caught LeBron James and Dwyane Wade’s attention, with each of them sharing the moment in their Instagram Stories. During a recent NBA on TNT telecast, Wade had nothing but high praise for the first-year NBA pro saying “he has all the tools” and could be a better player than him.

“I definitely think he can be a better player than I was. He has all the tools.”@DwyaneWade has high hopes for Anthony Edwards. pic.twitter.com/0CcSdPM3eK

Of course, on Twitter, the reactions to the dunk were coming left and right and are still pouring in as people are still reliving the moment.

Watanabe’s reaction to getting dunked on by Anthony Edwards! pic.twitter.com/0hhhddk2lz

You can peep more reactions to Anthony Edwards’s baptism of Yuta Watanabe below.

Anthony Edwards all over Twitter tonight with the dunk of the year. He also has 7 points on 3/14 shooting, 0/7 on 3s.

There is always one hater.

Kevin Hart with the perfect breakdown.